Once the UPC opens its doors, expectedly on 1 December 2017, a whole new European patent system will start taking shape. An exciting challenge for the future judges of the court, who will have to bring into practice a set of brand new Rules of Procedure and find common ground despite their different backgrounds and national legal traditions. And, very importantly as well, they will have to rely on a completely new e-system. 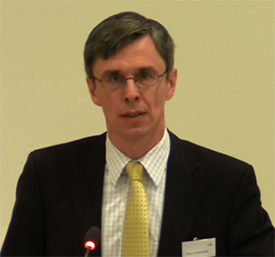 During the Unitary Patent Package conference, earlier this month in Amsterdam, patent judge Dr. Klaus Grabinski of the Federal Court of Justice in Karlsruhe, Germany, told Kluwer IP Law he is looking forward to the new Unitary Patent system, which he thinks ‘is an important project for the whole of Europe’.

Judges will face other challenges than they normally do

In a panel at the conference, he explained judges will face other challenges than they normally do in the existing specialized patent courts in their home countries. The first period of the UPC will be demanding, he thinks: ‘Judges will have to develop the so-called judge craft and set up harmonized standards for judgments, orders and other court decisions. In France, decisions of the judges can be very short, for instance, in England pretty long and in Germany rather dogmatic. Many issues should be decided on and harmonized.’

Grabinski and his French and Belgian colleagues Marie Courboulay and Sam Granata, who were also at the conference in Amsterdam, agreed there is an important language issue that still needs to be addressed by the UPC Preparatory Committee. Grabinski: ‘Most proceedings will probably be in English. But even though many judges speak that language quite well, it will not be easy for them to draft a judgment. Moreover, we need uniformity. All words used by judges have to have the same meaning.’ Grabinski thinks a specialized translation service is indispensable to correct and harmonize concept judgments, which then would have to go back to the judges for a final check before they are issued. Legal language should be part of the training for UPC judges, he thinks.

‘The case management system must function properly from day one’

Another challenge for the new Unified Patent Court is of a different nature, but no less important, according to Grabinski: ‘The case management system must function properly from day one. The whole litigation system at the UPC is going to be electronically based. Paper work should be an exception. So the success of the court will also depend on the question whether the e-system is going to work properly right at the start of the court.’

A lot of stress tests have already been done. ‘They were included in the work plan. But once the judges have been appointed, currently scheduled as from September, these will also do extensive testing and agree among themselves how to operate in the IT system.’

The tight schedule only concerns the full-time judges

Grabinski acknowledges that the time schedule is tight and judges, once appointed, will have little time to prepare for the first proceedings, which are expected in December. However, he points out, most judges will be part-time judges. ‘The tight schedule only concerns the full-time judges. For them it will probably be quite a challenge to deal with all the nitty-gritty things they will face before the court is going to start.’

Written by Kluwer UPC News blogger
Source: Judges will have to help build the Unified Patent Court – and the IT system must work!

The Unitary Patent Package Conference that was held on 9 & 10 February was a great success! The new date of the 5th edition will be announced soon. Would you like to be informed as soon as there is more information available?

Keep me informed about the 5th edition of UPP